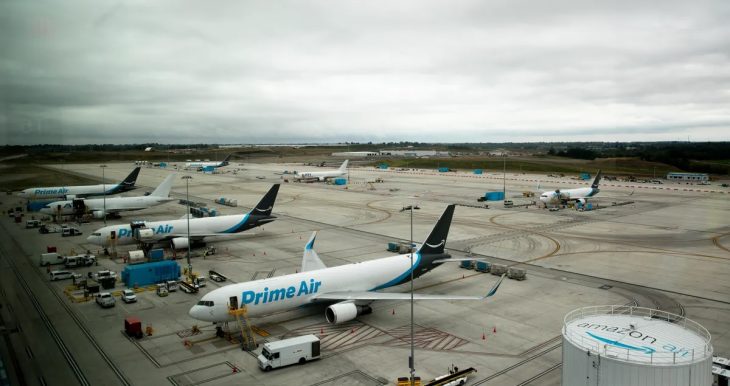 The union push at Amazon is now occurring at one of its most important locations.

“Amazon workers at the air hub outside the Cincinnati Northern Kentucky international airport, Amazon’s largest air hub in the world, are pushing to organize a union in the latest effort to mobilize workers at the tech company.

Workers say they are dissatisfied with annual wage increases this year. About 400 of them have signed a petition to reinstate a premium hourly pay for Amazon’s peak season that hasn’t been enacted at the site yet. Their main demands also include a $30 an hour starting wage, 180 hours of paid time off and union representation at disciplinary hearings.

‘We have to operate a lot of heavy machinery, freight loaders, cargo tractors and things like that, and people aren’t paid any extra to do that work,’ said Griffin Ritze, an air associate and ramp agent at the Amazon air hub, and a member of the organizing committee. ‘They just cross-train you in as many roles as possible and you’re constantly shuffled around.’

About 4,500 workers are employed at the expanding air hub in Kentucky. Those organizing have already filed two unfair labor practice charges over Amazon’s response to the unionization effort, which has included anti-union talking points on televisions and its communications system for employees that characterize the effort as a third-party scheme.

‘We’re the lifeblood of the company, not corporate, not upper management. We’re actually the ones who are sorting the freight, and loading the freight,’ said Jordan Martin, a ramp associate at the air hub. ‘It’s the lifeblood of the company, the workers, who are actually organizing this effort and why we’re pushing for the better benefits that we’re trying to fight for.'”