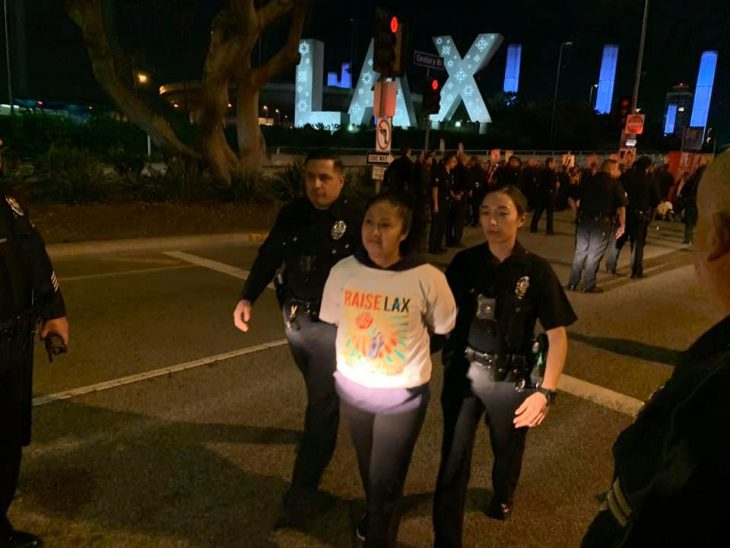 Sixteen people were taken into LAPD custody after participating in peaceful civil disobedience as part of a pre-Thanksgiving protest at LAX.

More than 600 people attended the demonstration calling on American Airlines to ensure that workers who cater its flights can afford to access medical care and raise their families in Los Angeles. Last night’s protest is the latest in a series of demonstrations at airports across the country calling attention to American Airlines.

“I sometimes have to choose between paying my bills or my health insurance,” said Margarita Hernandez, an airline catering worker with LSG Sky Chefs for 23 years. “My vein popped in my left eye and I had to go to see a specialist. I have not been able to because my insurance won’t cover it. I need affordable health insurance now.”

“Airline catering workers can’t wait to access health care or overdue raises while the airlines continue to post record profits,” Representative Judy Chu (CA-27) told the assembly. “It is long overdue for the airline industry to step up and do the right thing by these workers.”

Airline catering workers who are members of UNITE HERE Local 11 led the LAX protests today—one of the busiest travel days in the U.S.—singing and chanting in a procession down Century Boulevard in t-shirts and carrying signs reading, “Raise LAX.” Another group of nearly 200 airport workers came through the terminals and met the procession at the intersection of Century and Vicksburg Avenue, where clergy blessed the group of sixteen demonstrators who held a candlelight program.

In addition to LAX, protests and other acts of nonviolent civil disobedience took place in 15 other cities and major airports in New York City, San Francisco, Chicago, Miami, Philadelphia, and Washington, D.C. This summer, UNITE HERE airline catering workers at LAX voted overwhelmingly to strike when released by the National Mediation Board. Federal mediation of contract negotiations continues.

Airline catering workers prepare, pack, and deliver food and beverages served aboard flights for American Airlines, Aeromexico, Korean Air, and other major airlines. Though their work is essential to airline operations, a recent union survey of 124 out of more than 900 airline catering workers at LAX found one in four workers reported skipping or delaying care, prescriptions, or medical treatment for themselves or their families in the past 12 months.

American Airlines alone reported a 2018 annual profit of $1.9 billion. The airline giant, one of the largest in the world, will spend $1.6 billion on terminal expansion at LAX and $90 million over 10 years to sponsor the plaza at the future NFL stadium in Inglewood.

“We’re protesting at LAX and airports across the country so as many passengers as possible know that airline catering workers are sick and tired of being the lowest-paid and worst-treated workers in the airline industry,” said Susan Minato, co-president of UNITE HERE Local 11, who participated in the non-violent civil disobedience. “One job should be enough for airport workers, and we’re ready to do whatever we can within legal means to win what we deserve.”