Workers Go On Strike At Over 100 Starbucks Locations

Workers Go On Strike At Over 100 Starbucks Locations 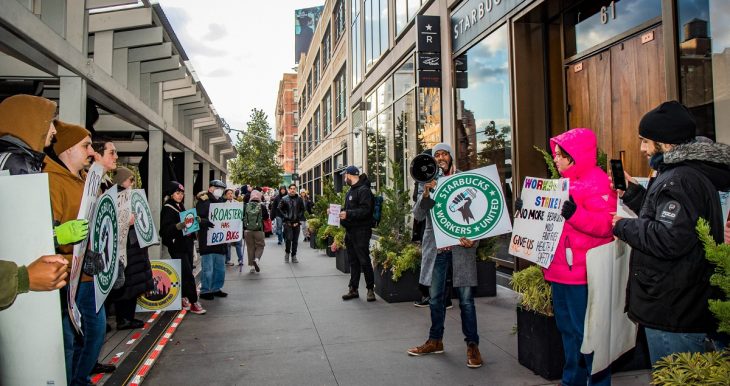 Starbucks workers are setting a model for workers at chains across the country as they engage in a labor action milestone today.

“Starbucks workers at more than 100 U.S. stores are on strike Thursday in their largest labor action since a campaign to unionize the company’s stores began late last year.

The walkouts coincide with Starbucks’ annual Red Cup Day, when the company gives free reusable cups to customers who order a holiday drink. Workers say it’s often one of the busiest days of the year. Starbucks declined to say how many red cups it plans to distribute.

Workers say they’re seeking better pay, more consistent schedules and higher staffing levels in busy stores. Stores in 25 states planned to take part in the labor action, according to Starbucks Workers United, the group organizing the effort. Strikers are handing out their own red cups with union logos.

Starbucks, which opposes the unionization effort, said it is aware of the walkouts and respects its employees’ right to lawfully protest. The Seattle company noted that the protests are happening at a small number of its 9,000 company-run U.S. locations.

‘We remain committed to all partners and will continue to work together, side-by-side, to make Starbucks a company that works for everyone,’ the company said Thursday in a statement.

Some workers planned to picket all day while others will do shorter walkouts. The union said the goal is to shut stores down during the strikes, and noted that the company usually has difficulty staffing during Red Cup Day because it’s so busy.”