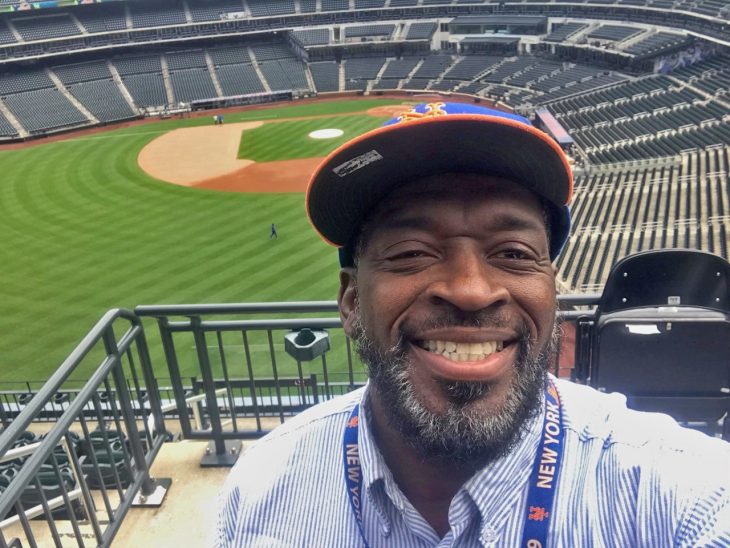 He is known informally as the Mayor. Because as he makes the rounds at Citi Field during the course of his work day, Greg Ingram seems to know everybody, and everybody knows him.

“I’m always a people person,” said Ingram. “That’s what I like most about my job: the people.”

In 1984, the fresh-out-of-high-school Bronx native was looking for a job. He had an uncle who worked for the Mets. The uncle got him hired, sweeping out the area of Shea Stadium  – the team’s former home – known as “the bowl” and collecting trash. Not long after, Ingram transitioned from a steady extra to a year-round employee.

In the years that followed, Ingram has handled an assortment of jobs for the Mets doing everything from coordinating schedules, running payroll and supervising a night crew of more than 100 workers. He is currently a porter, a member of the cleaning crew that concentrates on the executive offices as well as the stadium at Citi Field.

“You learn how to clean different areas in different ways and you take that experience home,” said Ingram, a father of 5. “And you keep the house really clean.”

In his 35 years with the team, Ingram has been on hand for Mets  highs and lows including the team’s World Series appearances in 1986, 2000 and 2015. He interacted with and came to know members of the 1986 championship team including Darryl Strawberry, Dwight Gooden, Gary Carter and Ron Darling. In 2000, he recalls being in the tunnel as the Yankees were coming through.

“It was like a shock to turn around and see Andy Pettitte, Mariano Rivera walking up on you,” Ingram said. “It was greatness. [Mets Owner] Mr. Fred Wilpon is a really good guy, too. He would stop by and talk and then he’d come back and say ‘I remember you.’ He always showed us love.”

As a long-time member first of SEIU Local 54 and later 32BJ, Ingram was a shop steward from 1988 to 1996. In 2017, he earned the local’s Building Service Worker Award for Stadium/Theater Cleaner of the Year.

“By being a shop steward, it showed the union that I had their back,” Ingram said, “and it was easier for me to do my job. You know when you have somebody behind you.”

Remember that 2000 World Series were talking about? Ingram had divided loyalties. Growing up in the Bronx in close proximity to Yankee Stadium, Ingram rooted for the Yankees. That’s right…the Mayor of Citi Field is a Yankees fan.

“I root for the Yankees and the Mets,” Ingram says. “The Mets pay the bills.”

Union Night at Citi Field will take place Sunday, Sept. 29 as the Mets face the Braves at Citi Field. For more information and tickets, click here.